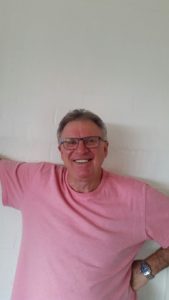 Wayne Roberts:                Well, not a lot really. I mean 40 years of my life was in broadcasting and I was very busy. It was always The Breakfast Show, so it was full on. It was up at three o’clock in the morning, getting yourself pumped up and ready to go on air at 5:30, maybe six o’clock, and finish at nine o’clock. Then you’d hang around and put the skeletons of a programme together for the next morning. Monday to Friday was furious. You’d really used to look forward to Friday, sort of mid-morning and get down to the breakfast Creek Hotel. Went to the public bar, there was a keg off the wood and probably you and a dozen mates would probably drink the whole bloody keg, and a big steak, when you could get a nice big t-bone with the big tile on the bottom.

Wayne Roberts:                Well yeah, my dad said that too. He was a shift worker, he drove trucks in the markets and he said “Son, you’ve only got to do maybe 12 months of shift work and you’re buggered.” But I don’t mind waking up early. I listen to the radio and try and doze on and off. I get up and have a bit of a walk, I play golf, poorly, two days a week with some good mates out of the Brisbane Golf Club. I’ve got five grandchildren, I get involved in there, picking em up from school occasionally. I have a place in Tasmania now. I love my gardening. So I’m probably nearly just a busy as I ever was.

Wayne Roberts:                Well I can’t stand commercial radio now. I just think they’re agenda now is more music than it is to nurturing personalities. Like in my day, every radio station in Australia, in the 70’s and 80’s, were driven by personalities, by people–whether you liked them or not. They all had their personality or personalities. Today they don’t. They claim they have, you know with funny names like Lutzy-Blutzy and Clendo, you know. You don’t know who they are. They also have two blokes and the token blonde that giggles all the time.

So, post-radio, after the 2000 Olympics sort of round about that time, you’ve been backwards and forwards to Tassie? Been doing any sort of casual work? Voiceover sort of stuff?

Wayne Roberts:                There was a couple of people that I used to write … And I still do it for a bloke, he’s a humble lawnmower sales and service fellow out of Lowood. And I love the bloke, he’s just a great bloke, great family bloke and I do his commercials for him, for nothing.

And the other half of the Wayne Roberts Breakfast Show, was The Flart. And Ross is still around? In the media industry?

Wayne Roberts:                Yeah, Ross has his own compact, as he calls it. Advertising agency. He has a stable of clients that he’s had now for quite a few years. He does very well, Ross. But he does it all himself.

Wayne Roberts:                In the moment, I know we’ll go back to my earlier cars, but as I’ve got older, and I don’t know whether it’s a thing that’s with age, but I no longer need the fast car or the car that tries to make an impact out there. Because I’m very much in my own little world, I like to be cocooned from noise and everything else. I want to drive something that’s got a bit of a Don Rex, lounge chair to it.

Wayne Roberts:                I bought it brand spanking new. It’s only done 103,000 kilometres now. But because I have another vehicle, vehicles, in Tasmania, and I’m down there for four five months of the year, I don’t use this. I still get great pleasure in getting in the car and driving it.

Wayne Roberts:                I reckon that’s been the most reliable, value for dollar, car I think I’ve ever owned. And I’ve had some swish cars, if you want you ask questions.

Wayne Roberts:                And everyone where I’ve gone, I’ve joined the old Jaguar club and the old bloke said, I remember the first conversations I had with him, or even when I bought my first brand new Series III Jag from Joe Camalleri, who had the franchise. I bought it there in 1980. It was a white one-

Wayne Roberts:                She drives a Golf. She’s got a Golf that’s probably nearly eight years old. It was the first Golf to come out with a 1.4 tiny little engine with the turbo charger and the super charger.

Wayne Roberts:                Mm. Which is a lovely car, you know. But I found out owning all of these luxury cars, and you being in the game would know, that as soon as you drive it out of the garage the value just-

Wayne Roberts:                And they do in those days, cause of the big backseats I think. And I had this Ford Falcon which I loved. But I did terrible things to it. I couldn’t afford extractors and stuff so I got a screwdriver and bashed holes in the muffler to make a bit of noise.

Wayne Roberts:                I [inaudible 00:12:55], apprentice’s wear was a five year apprenticeship, I was probably into my second year and I don’t know how many pounds I was making a week but it wasn’t a lot. I always got in the habit of giving mom some money for board and also some money to put in the bank for me. That sorta help me get the car.

Wayne Roberts:                First thing you learn. You know you don’t cross thread. The trick they did to me, wasn’t go and get the left-handed screwdriver or hammer or whatever, we used to wash everything out with Shellite.

Wayne Roberts:                So I got my first big bucket of Shellite. And the tradesmen come along, who used to smoke as well, Phillip Morris, used to stink, and I used to smoke Rothmans and he took the cigarette out of my mouth, he said, “You should not smoke around Petrol.” He got the cigarette, you know what he did?

Wayne Roberts:                No, it’d be nothing like that. You know what I think I’d buy, I think I’d buy something that’s probably diesel and I like the look of the new Mercedes C Class, 250 Deisel. I think that would be a nice comfortable car for me.

Wayne Roberts:                Yeah, I think you’re right, I did mention to you a while back about a Bentley. Yeah, I’d love a Bentley. But I think id be worried about people bumping into me or people getting a key and …

New Cars, Corona Virus and Getting a Great Deal