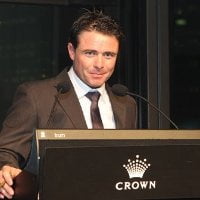 Bob:                       Another good afternoon, welcome to “What’s In My Garage.” This afternoon I’m at a Men of League function with the Queensland CEO Frank Barrett. I’ve known Frankie for a few years now; good bloke. We’re going to ask him the obvious question, Frank what’s in your garage?

Frank:                   Yeah, thanks Bob. Great to catch up, and I do appreciate our friendship and our support that you’ve given us over the years here at the Men of League Foundation. Pretty simply, we help the men, women, and children of the rugby league community not only in the hard times which is important, but also to celebrate the game and raise funds for those that are a little bit in need.

Frank:                   He certainly comes through a lot of prominence a little bit after it started. How it actually started was Ronnie was going into hospital to see his daughter who was having a baby, and one of his former teammates was in there and he was crook. The nurse said would you come down and see this man. He went in and he had no visitors. He thought, “We need to do something for that.” From 2002 over $4 million worth of benevolences have now been given out.

Frank:                   Absolutely. We’re a deductible gift recipient; we’ve got the highest status in the not-for-profit, and it’s very important the governance of it. It all goes into a central pot in Sydney, nationally out of Sydney. Then it comes back through a process. You’ve got to tick the necessitous needs part. If you can’t do it on your own, we’ll help you out.

Frank:                   Absolutely. Bob, what you’ve done for the foundation is indicative of what people do out there for us. Not only vehicles that have helped us raise money through different means, and we’ve raised a lot of money through vehicles you’ve supplied for us. Also been able to fix some solutions for people, Ryan Smith is one that jumps to mind.

Where to for the Men of League from this point in time as we’re sitting here in November, 2016?

Frank:                   I think it’s a very good point. As we sit here now, what it needed in 2010, what it needed in 2002 were all very different. Like a lot of foundations and businesses in general, it needs to evolve. What it’s about now is working out there’s that much need out there, there’s that many people under tough times or challenging times. A lot of it might be just social isolation; needing someone to give a phone call. Just working out where our charter is, where we sit on the whole broad rugby league community. We’re funded by the ARLC; John Grant the Chairman is a great supporter there.

Frank:                   He’s a good Queenslander, isn’t he? He helps us out with basically covering the majority of our operational funds. The money raised by our volunteer committees, we’ve got 14 across the state, 40 across the nation, then can go directly to that benevolence.

Frank:                   Very best way is to do what you do, and become a member. $20 a year you’ll get your magazine, these days you can get it electronically so an email once a quarter, and it will tell you all the things we’re doing. You can make donations via the Men of League website.

Frank:                   Yep. Away you go. You’ll see that there’s sections there of welfare, there’s our story, there’s photo galleries. There’s some videos; we’re starting to get good traction on the videos. That helps find out. That’s what today’s going to be about, to tell the people here our wonderful supporters and our key stakeholders what we’re doing with their money.

Frank:                   Today’s a thank you. It’s to thank people like yourself, the people that supply us with raffle prizes, they buy tickets to things, they donate. Most importantly, they go out and visit the community and help them. Wally Fulton Smith [crosstalk 00:05:29]-

Frank:                   Wally gets out and visits the spinal unit at the PA, he drives to Toowoomba, Dalby, Mackay, Innisfail, wherever to visit people. Just to say thank you to those people, the hard working committee here in Queensland. My staff, to thank them, and people like the Caxton. Some of our partners. Very important, today.

Frank:                   I really encourage people to get to a number of functions that run around Brisbane and broader Queensland, and across Australia. Get out and enjoy them. We’ve got a Steak and Shiraz on next week at the GABBA. I think you might be going to join us?

Frank:                   We might get him. They’re great days where we can go out and you can share some stories and enjoy guest speakers. If you need a hand we asked people to reach out as well.

Frank:                   Skyfleet Motors. They are wonderful supporters, and Steve Duncan and the crew there supplied us with that vehicle. They did sell my vehicle on the weekend and I had the weekend in a Kluger, a Grande. I wouldn’t have minded staying in that, it was beautiful. I love the Rav4, and it’s a beautiful family vehicle.

Frank:                   Really appreciate that. Wonderful supporters of Men of League for a long time and this year we firmed that into a partnership.

Frank:                   If I could drive like that I would but I don’t think they wanted me off road in it. I’m a bit of an urban bushie, so I threw the dogs in the back for many weeks. I was living in Newcastle, so the Holden ute was what I always wanted and I loved it.

Frank:                   Right. Well see that wouldn’t mean a lot to me? Because I’m not terribly savvy on the cars. You know what I’d honestly do? I would get advice off you. I’d ring the Australian Skipper Cameron Smith, and say, “What would I do?” Because he’s a petrol head. I think I’d end up with something that was big, maybe like a luxury 4WD-

Mate, I’m really glad that you were able to join us on “What’s In Your Garage?” It’s a series of podcasts that will be launched in the next month or so, and we’ll do one a week. One a week be released. I’ll send you a copy of it when it’s on air.